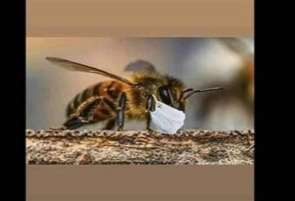 Bee Keeping in the Time of Covid19

This short three-part essay looks at the current COVID-19 health crisis and how bees fit in. Warning: there is not a grain of scientific fact or even logical reasoning to be found in my ramblings. What follows are the thoughts of an accidental apiarist with too much time on his hands while he socially isolates with his hive. I do hope, though, that you share my belief that during tough times, laughter can be the best medicine.

Are my bees keeping me sane during this pandemic crisis or perhaps making me insane?

Lately, while tending the meagre hive that I struggle to keep alive, I keep having weird science-fiction daydreams. A Gene Roddenberry meets Lorenzo Langstroth meets Salvador Dali fantasy. Wouldn’t it be incredible if I could train my bees to intercept then destroy tiny airborne COVID-19 virus germs? This is such a stupid idea on so many fronts, but I can’t seem to shake it. Diving into my three-box hive for an inspection my mind seems to wander in these times of social isolation, more than it ever has before. Maybe I’m just craving distraction from all the real craziness going on around us.

Full disclosure here: I am the world’s worst beekeeper, and I know nothing about viruses. I failed biology in Grade 9 and hardly know the difference between entomology and epidemiology.

But before you start measuring me for a straightjacket, please keep a few things in mind. First off, bees are very, very smart. They are biologically wired to gather small particles and are sensitively attuned to the environment around us and all its checks and balances. They see and sense things we can’t. From watching copious amounts of CNN over the last three weeks, I have learned from Dr. Sanjay Gupta that when infected people talk, sneeze, and cough, tiny microscopically small droplets of the COVID-19 virus become airborne. The aerosol virus-laden droplets that come out of our mouths linger for a short period until gravity eventually pulls them down to the ground. We can’t spot these droplets, but my bees may be able to. From all the serious TV watching I have done I’ve learned that the droplets look like golf balls with little mini red crowns growing all over them. Corono is Spanish for crown, by the way, and the virus is named for its resemblance to a monarch’s ornate pointy headgear and not the Mexican beer. So the task would be to train bees to identify the Corona droplets, (shouldn’t be that hard since I just gave an excellent description of them) then teach the bees to gather up the virus droplets with the hairy legs they usually carry pollen with, and bring the diseased aerosol snot-droplets back to the hive where they could be safely stored in wax cells until they die out. Hey, sending a man to the moon may have sounded crazy fifty years ago, and training that dolphin Flipper to act in the 1960s TV show wasn’t easy either . . . just sayin’.

Furthermore, bees number-one enemy is a virus, so it is not as if they don’t understand the destructive and ravaging nature of a pandemic. The honeybee’s single biggest threat is a virus-carrying parasite called the Varroa Destructor Mite. Like Covid19, the Varroa destructor mite and the virus it carries is a modern plague, having been discovered in North America as recently as 1987. Just as the common honeybee or Apis Mellifera is a universal species like us humans, the Varroa virus chasing it down has spread all over the world. Many current-day comparisons can be drawn, as we too find ourselves now being plagued with something we can’t even see and that effortlessly hops from continent to continent in search of a host. If only humankind and bugkind could team up to stamp out these two unwanted scourges.

Beekeeping in the Time of Covid19 (2)

Beekeeping in the Time of Covid19 (3)